Impact of ADHD in the United States School Children 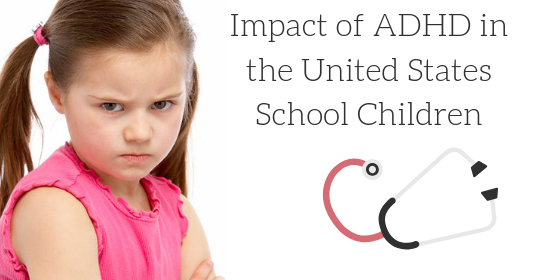 Attention deficit hyperactivity disorder (ADHD) is a seemingly serious mental ailment which falls under the neurodevelopmental type. Children with ADHD have trouble being attentive and experience hyperactivity. They also face problems while dealing with emotions. This often affects their daily activities at school and at home. However, these types of children often give constant attention to certain kinds of tasks which they find interesting.

How are children affected by ADHD?

ADHD is characterized by poor concentration and kid pays less attention in school. ADHD affects the child’s social skills too. Few most common social challenges caused by ADHD are as follows:

How common is ADHD among kids?

Why is ADHD raising in the U.S?

Boys are nearly three times more likely to be diagnosed with ADHD (13.2 percent) than are girls (5.6 per cent). In adults, the rate is much lower (about 4.4 percent), but experts caution that this reflects only reported diagnoses; the prevalence of ADHD may be significantly higher since many adults, particularly women with inattentive symptoms, remain undiagnosed.

ADHD is a growing concern in the US since this is quite common in children and parents. Following are the main reasons which are supposed to cause ADHD:

What schools can do for ADHD affected students?

Schools can discuss the concerns with parents and take decisions as to how the situation can be improved. If the child’s behaviour affects the ability to learn treatment plans can be discussed and crafted. Schools can also arrange medical camps with expert doctors who would suggest and prescribe medications and treatment programs. If there is a proper collaboration between parents, doctors and teachers ADHS can be diagnosed and prevented to a great extent.

Get in touch with us to know more!

How do electronic health records (EHR or EMR) improve the quality of care
February 17, 2022

Healthy sleep is vital for a students’ well-being.
December 9, 2020

Helping children understand emergencies and cope with it
April 13, 2020