How are schools across the globe re-opening amid COVID 19

You are here:
covid-19 resources 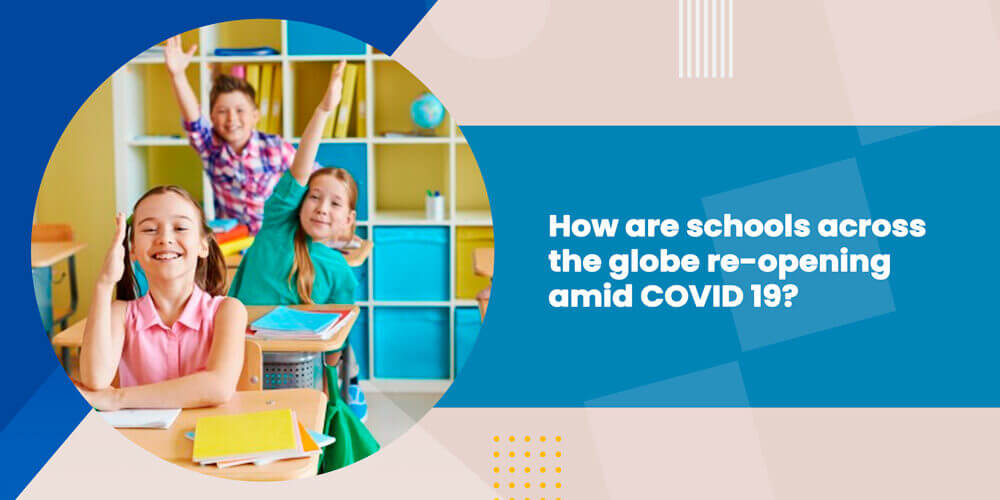 While big-city school districts and schools in communities living in high poverty and less likely to re-open for in-person classes, the academic year begins for 50 million children in the US. The Center for Reinventing Public Education has analyzed reopening plans for almost 500 school districts across the country, including many of the biggest ones.

Across the US, one in four school districts plans to reopen entirely remotely. An analysis of school district plans has it that about 80% of urban schools will be remote only, compared with 34% of suburban districts and 13% of rural districts.

As for other countries and their school reopening plans, some of them have been cautious about reopening and those who have gone ahead, have seen mixed results. Most others don’t plan to resume in-person classes until 2021. However, it is a lack of access to technology and the widening achievement gap seems to be having school leaders in a dilemma: reopen schools and risk virus outbreaks or continue with virtual classes and leave a set of students behind.

Most schools are yet to put in plans on how to deal with an outbreak in their schools. If the schools face an outbreak, it puts children, teachers, their communities at risk, which could even cause deaths.

How have countries responded

Isreal opened its schools in May and had not imposed social distancing guidelines, which resulted in full-size classrooms with close to forty children in them. Reports have it that over two thousand people have tested positive throughout the country’s education system since with the death of one teacher. Following these incidents, most parents now refuse to send their children to school over concerns about everyone’s safety. Israeli schools with reported cases now close for two weeks and all staff and students are required to quarantine for the period.

The Germans have taken a different approach. They’ve kept classes running, forcing those with close contacts with infected people to quarantine.

The Swedish never closed their schools and have been on with a risky gamble skipping the COVID 19 lockdown. Only students 16 years and older stayed home and continued learning remotely. With a focus on personal choice, social distancing and masks were recommended, but optional.

Japan, which has mostly been successful at keeping COVID 19 at bay, has taken a conservative approach. Japanese students attend classes in person on alternative days, so classrooms are only half full. Lunch breaks are silent, socially distant and students undergo everyday temperature checks.

Uruguay’s well-organized and efficient public health system and their strong faith in the government has led to successfully stopping COVID 19. The country has the lowest rates of COVID 19 cases and deaths and has not shut down its economy entirely. Uruguay was one of the Western Hemisphere’s first countries to send its students back to school in stages.

Only six African countries have fully reopened schools. In Sout Africa, students are returning to school in a phased manner by class. It’s the second time schools are reopening after the initial reopening resulted in a spike in the number of cases, forcing schools to close.

Eleven million of UK’s students have not been to class since March, but children will start returning to schools in September. The British Prime Minister Boris Johnson has urged parents to send their kids to schools and has called reopening schools his “moral duty”.

As for most of South and Southeast Asia, most schools remain shut. Most Indian schools have moved to remote learning. In Sri Lanka, the government has allowed schools to partially open for August.

Managing asthma as students return to school during COVID 19
October 1, 2020